’twas a time when my elders tended to think before they spoke, especially if there were children around. Sometimes they spoke in code, just enough words, just enough references so the listener understood but we wee ones, or eaves-droppers, didn’t. When questioned by inquiring minds, the answer was, “Think before you speak. You can always take back your thoughts; you can never take back your words.” Any of this sound familiar?

Friday night MSNBC’s Chuck Todd came up with something brilliant. He was musing that in every generation there was a picture, event, speech that seemed to capture the mood of the country. He said he’d been thinking for weeks about one that would capture this moment in America’s history. He was becoming obsessed with his failure until he received a video taken by a man who was in the passenger area of Chicago’s O’Hare airport. It was Todd’s “Aha!” moment.

Here’s the scene. A three-car service cart was approaching a jet to restock it. What was missing was the driver. Suddenly the mini-food train made a hard left and went in a circle. ’round and round she went; where she’d stop no one knew, which is why the maintenance folks were giving it wide berth. Sometimes the circles were tighter, sometimes wider. Since it was full, getting hit by it would feel like getting hit by one of the bulls running after you on the streets of Pamplona, Italy. Todd said, “this is what Americans must feel like right now.”

I am going to add something, equally as high brow, but I think equally as visually impacting. It is a commercial where a bunch of goof-balls is trying to outrace the same bulls mentioned above. As one looks over his shoulder (he should have listened to ole Satchell Paige who said, “Don’t look back–they may be gaining on you…) to see how close the bulls were to him a lady in a street-side apartment throws open her shutters to let in the sunlight and of course smacks this guy right in the puss. He lands right on his ass. This I fear is going to be the sequel to Todd’s maniac food cart. All this nonsensical running in circles is going to stop with a jolt that will hit us in the faces and knock us on our asses. It will be a while until we find out if the result is just being sore and black and blue or a lot worse. 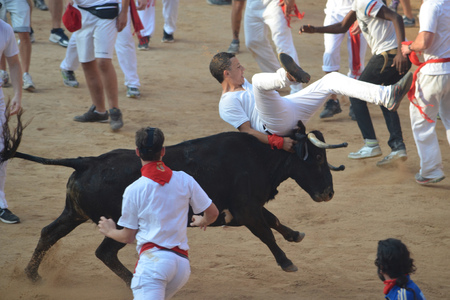 And you know, if everyone had thought before they spoke…

Let me try one more TV show on you. It’s Netflix’s Parenthood and features a family that at times remind me of the food cart above. One member is a youngster with Asberger’s Syndrome a type of Autism. As he grows and works with specialists, he is taught that actions have consequences and in a just world the consequences fit the actions. Unfortunately, the boy’s view of fair and his world’s reality often don’t mesh. He screams in a tantrum, “IT’S NOT FAIR! IT’S NOT FAIR!”

So here we are America. The president is having tantrums and in terms of volume and content is matched if not exceeded by his personal attorney who screamed at a fellow panelist two weeks ago, “SHUT UP, YOU MORON. YOU DON”T KNOW WHAT YOU’RE TALKING ABOUT!”

We have more democratic candidates than we need or can use one of which is ignoring the fact that he just had a heart attack. They, of course, all have something to say about most anything. We have Republicans who are either deaf, dumb, and blind or honing their skills for the contest for best imitation of the three monkeys. We have Republican challengers to the throne whose names are known mostly to their wives and children. There’s Ukraine (sorry as hell they ever got talked into giving up their nukes), and Russia acting like it was the USSR but in reality, having an economy the size of Italy’s. Add Turkey, Saudi Arabia, Israel, Yemen. As Tweety Bird used to say, “My doodness drayshish.”

And you know at some moment, someone is going to swing open that shutter. Except in our commercial, the shutter has a big “I” on it. The woman who opens it will be wearing a smock that says, Chaos.”

But if everyone would keep their voices down and their mouths shut for a bit, and play Joe Friday, only caring about the facts, who knows?

So let’s end with an oldie but goodie, William Bendix from the Life of Reilly who would intone morosely to one screw up or another, “What a revoltin’ development this is!” And it is, at least from my perspective.

And remember what he says, “Read! It’s good for both of us.